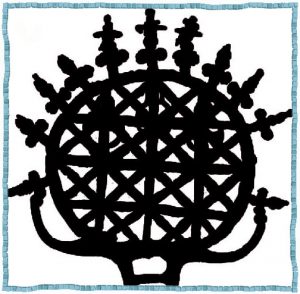 Almost 4000 years ago the Hittites established a kingdom in Anatolia (the Asian part of modern Turkey). They became one of the great powers of the ancient world conquering Babylon and challenging Rameses II’s Egypt, Greece and Troy.

Unlike other major civilizations of the ancient world, knowledge of the Hittites was largely lost until the 19th century except for references in the Old Testament and Egyptian and Assyrian records. Translation of the cuneiform script of the Hittites’ Indo-European language completed in the mid-20th century confirmed the extent and importance of the Hittite empire.

Hittite sites have now been discovered through large parts of Anatolia and northern Syria but the capital was at Boğazköy (Hattusas) 240km east of Ankara. The Museum of Anatolian Civilizations in Ankara (sometimes known colloquially as the Hittite Museum) has an excellent collection of Hittite relics. 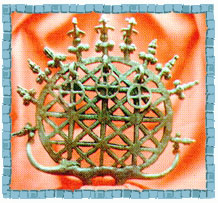 The “Sun disks” (an example, now used as the Timeless logo, is at top right) were found in a group of 13 tombs at Alacahöyük near Hattusas, known as the “Royal Tombs” and dating from the early Bronze Age. The majority are made of bronze, but two striking examples are in silver. They form an important group of objects.

Why these objects were put in the tombs, sometimes with more than one in each tomb, remains uncertain. Since they are adorned with figures of sacred stags and bulls and framed with bulls’ horns, it would seem that they had some ritual significance. They disks are thought to represent the sun. They have projections at the bottom, by means of which they were probably attached to the top of wooden poles for carrying. They poles had handles made of gold or silver.

Some of the decorative elements (the animal figures and flower buds) are fixed on the disks, while others are left to move freely. These parts are thought to have made in this way so that they would a jingling noise when the disks were paraded at rituals and festivals.

The sun disks can be divided into four distinct groups.
1- Semi-circular; 2- Diamond shaped; 3- Circular with bulls’ horns; 4- Circular or semi-circular of complex design with animal figures and horns.

For further reading refer to J G Macqueen, The Hittites and their Contemporaries in Asia Minor.